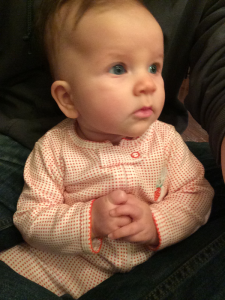 My little sweetie is four months old this week!

Hope you had a great weekend. Ours was a whirlwind of friends both here in Portland and visiting from out of town, thanks to the Wizard World comic convention. This is the third year Wizard World has come to Portland, and it’s a controversial event for many–here’s an article or two summing that up–with most, if not all, of the local comic book retailers and the majority of the comic book publishers declining to exhibit.

I went for the first time this year, feeling very odd due to my new civilian status–after six years working in marketing for Things From Another World, an online and brick-and-mortar comic book retailer, I’m accustomed to working the booth, not milling around the show. (I’ve since quit my job to stay home with Sarah and Sid, for now.) I was shocked at how packed the convention was. Less shocking was the fact that I barely recognized anyone; a large swath of Portland’s geek population stayed home.

But having out-of-town comic pros visit has been the perfect excuse to socialize–and cook. We had the Buffy Season 10 creative team, Christos Gage and Rebekah Isaacs (as well as her charming boyfriend Josh from LitReactor), over for dessert (chocolate cake), and we’re having another group over for dinner tonight, which leads me to: the Circle of Chicken!

I will be posting all of the Circle of Chicken recipes this week, starting with Perfect Roast Chicken on Tuesday. I’m making it tonight so that it’s fresh in my memory, and I’ll have a chance to take (mediocre) photos. I bought a five-and-a-half pound chicken for about $5.50, and I’ll show you how to make it the basis of at least 16 meals: roast chicken, chicken hash, and enough broth to make two pots of soup, or a pot of soup and risotto.

In other news: Sarah will be four months old this Wednesday! To celebrate (and to cut down on our garbage), we’ve started using the GroVia hybrid cloth diapers. We’re easing our way in (I’m still using disposables at night), but we’re taking things to the next level this week with cloth wipes. I’ve got some reusable cloth diaper wipes from GroVia, and I’m going to make this homemade diaper wipe spray.

This was triggered in part by Zero Waste Home, this insane book I read last year as part of my research to cut down our garbage–in anticipation of using disposable diapers. (I was violently opposed to the idea of cloth diapers until my friend Lis told me all about her very positive experience–plus, I estimated that we’ll save at least $1,000.) The author, Bea Johnson, and her husband and sons went from a 3,000-square-foot home–and the gallons of garbage modern life typically produces–to a home that was less than half the size, and now produce less than a quart of garbage a year. A quart. Of garbage. Per year.

A lot of her strategies do not work for me–I don’t think any of the grocery stores in the area would let me shop the meat and deli department with my own glass jars instead of their own plastic and paper–but it did inspire me to finally start using cloth grocery bags (welcome to the 21st century, Elisabeth) as well as reusable produce and bulk bags. And, ironically, cloth diapers, although Bea probably wouldn’t approve of the plastic and polyester contained in the GroVia diapers. Anyway, I’m re-reading the book this week, so there will likely be another blog post on the subject.

Got to wrap things up now–need to go upstairs and finish a batch of peanut butter cookies, which I’m trading for a cloth diaper sprayer, a gizmo that attaches to the toilet so you can . . . well, you can probably imagine. Dear Lord, is this my life?!? Psyched about the barter system, though.

So update me on your weekend! Does anyone have Wizard World, chicken recipe, or cloth diaper experiences to share? Funny combo, right?

3 thoughts on “Update: Comics, Circle of Chicken, and Cloth Diapers”